A full night’s sleep is essential to your overall health and wellness. If you are well rested, you feel good and can function at your best. According to statistics, approximately 25 million adults in the United States suffer from obstructive sleep apnea and more than three times that number snore. As specialists who are trained in the complexities of head and neck anatomy as well as its relationship to airway function, oral and maxillofacial surgeons are well equipped to provide the guidance and care in cases of obstructive sleep apnea.

What Is Sleep Apnea?

Sleep apnea is a serious and potentially life-threatening disorder involving repeated pauses in breathing while asleep. The most common form of this condition is obstructive sleep apnea. This occurs when there is an obstruction of an individual’s airway that interferes with the flow of oxygen through nose or mouth during sleep.

In someone afflicted with obstructive sleep apnea, the muscles of the throat and mouth relax during sleep to the point where they fall back into the upper airway and create a blockage that restricts breathing.

What Are Some of The Signs & Symptoms of Sleep Apnea?

The signs and symptoms of this disorder during sleeping hours may include, loud snoring, episodes of breathing cessation, abrupt awakenings, episodes of gasping for air, along with difficulties getting a good night’s sleep. An individual with sleep apnea will exhibit problems during the day as well. Sleep apnea can lead to a morning headache, excessive daytime sleepiness, difficulty concentrating, and irritability. Furthermore suffering with sleep apnea can be associated with other medical conditions such as diabetes, cardiovascular and heart issues, gastric reflux and depression.

How Do I Know If I Have Sleep Apnea?

A sleep study is typically conducted to determine the severity of the disorder. The results of this study along with other medical findings will play a role in determining the recommended therapy. In some cases testing to diagnose obstructive sleep apnea and determine blood oxygen levels along with how well you are breathing while sleeping can be done in the comfort of your own home.

What Is The Treatment For Sleep Apnea?

The most common form of therapy for obstructive sleep apnea is a CPAP machine that is worn while sleeping. This device provides a steady stream of pressurized air into the respiratory system through a mask. However, in the presence of mild to moderate sleep apnea, an oral appliance is often prescribed to treat the condition. Worn in a similar fashion to a mouthguard or an orthodontic retainer, the appliance is designed to help keep the tongue and soft tissues in the back of the throat from collapsing, thereby enabling the airway to stay open during sleep. While conservative treatment to ensure a healthy as well as restful night’s sleep is often successful, in some cases surgery is recommended. Our oral and maxillofacial surgeon can advise patients on the right course of care and perform specific surgical procedures as indicated. 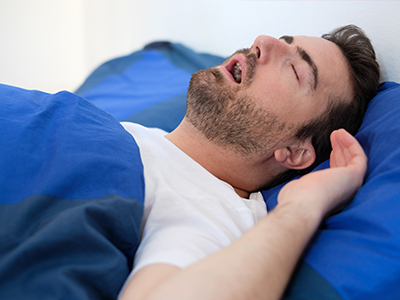